Pairing fish and chips with sparkling wines, introducing an express menu and offering garlic and rosemary infused salt and ham hock mushy peas are just some of the things newbie shop Malt & Anchor in Cirencester is doing to make itself stand out 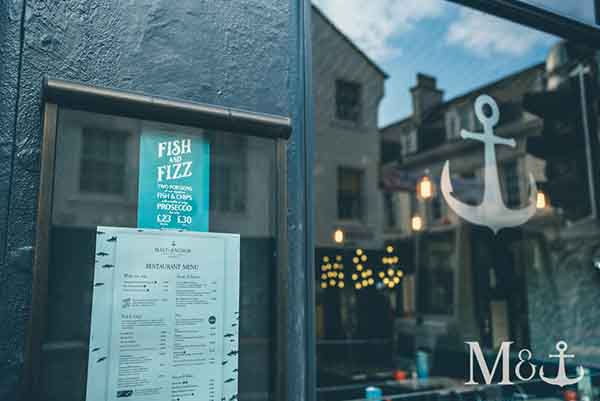 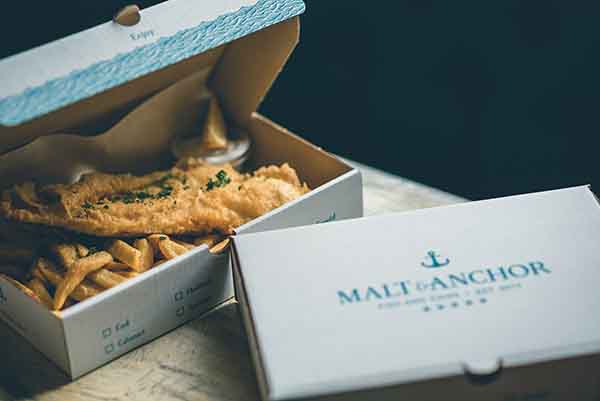 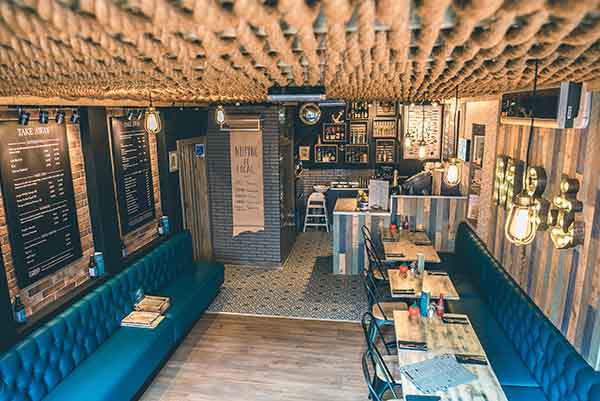 When nightclub owner Dan Lafford went into business with his father 10 months ago there was an initial disagreement as to what approach to take to their fish and chip shop. While Dan’s father wanted to keep things simple and be in and out quickly, Dan wanted to open something a little bit special, something that would make its mark on the town and reflect the quality of food he had in mind.

“I knew if we were going to come into this and be a new fish and chip shop we couldn’t just be the same as everyone else,” remarks Dan. “We were a new business after all, we didn’t have an existing customer base so we needed to think how could we get people in? I’ve always had big ideas on how I can, not change it, but shine the fish and chip industry in a different light.”

With a “nautical/industrial’ decor as Dan calls it - walls constructed from reclaimed pallets, old crates nailed to the wall for shelves, carnival lights that prove both practical and stylish and £4,000 worth of rope hanging from the ceiling - the decor definitely makes this shop stand out. While the takeaway menu offers all your typical fish and chip shop fare, there’s MSC cod and haddock, battered prawns, calamari and homemade sauces, the restaurant menu offers the opportunity for customers to be that bit more adventurous.

Dan explains: “In catering it’s all about upselling, but we try and do it in a way that isn’t so in your face, so we write on the menu would you like to upgrade your batter to beer batter, your mushy peas to ham hock and leak mushy peas or change your chips to sweet potato fries.”

Customers can also help themselves to a range of different salts, for example garlic and rosemary. It’s all about giving customers the option to try something different, to move fish and chips on but without enforcing it on everyone.

With his background of working in bars and nightclubs, Dan saw a market for linking alcohol with food and has developed a range of cocktails that go well with fish and chips, created his own beer called Hooked with a local brewery - which he now sells to the local pub - and his jewel in the crown, specifically selected sparkling wine, prosecco and Champagne.

Dan comments: “In the last four or five years sparkling wine has been classed as the best complement to food ever. The carbonation in sparkling wine and Champagne cuts through the fat, so when you eat fish and chips it cleans your palette for the next mouthful. The bubbles go well with the crunch of the batter and because Champagne and prosecco are acidic, just like vinegar, what we always encourage our customers to do is before they douse their fish and chips in vinegar is to just have a mouthful of prosecco first.”

Offering a promotion on Mondays and Wednesdays where customers get a bottle of prosecco and two portions of fish and chips for £30, it’s giving trade a boost on its quieter days.

Another trend Malt and Anchor has been quick to piggyback onto is health and well-being. “The industry norm is to keep fit,” believes Dan. “Everyone’s walking around in their leisure wear whether they are going to the gym or not! So we’ve recognised that and we do an Express Menu that we can turn around really quickly and on there we use a fresh fishmonger and we chop and change the choices every quarter. At the moment, we have a mixed seafood salad with calamari, octopus, cockles and muscles. Something else that’s gone down really well is a smoked haddock fish bake.”

It’s working well for the shop, the margins are good, it’s offering customers something different and it’s a way to turn over tables quickly - Dan estimates food is served in about 10 minutes rather than the usual 20 minutes.

For those that want to take their food away, Malt and Anchor has encouraged customers from the very start to phone orders through. Dan explains: “The restaurant itself is quite small so we’ve got a three pan Florigo range downstairs and we use a dumbwaiter to bring up the food. Unlike a lot of chippies, we don’t have a hot box at all, so everything is cooked to order and has to go straight out.”

By offering a discount on phone orders, Dan estimates about 75% of his customers now do this, creating a win-win situation - customers get a freshly served product without the wait while Dan can anticipate demand and doesn’t have a long queue of customers for the takeaway filling up the restaurant.

All these elements are helping to drive trade, with Dan saying: “Cirencester is quite a hard nut to crack, people are set in their ways. It’s a bit like a hair dressers, when you get your favourite fish and chip shop it’s really hard to pull people away, so that’s why we’re really trying to push ourselves and think outside the box.”

With a price point Dan considers high for the area - an 8oz portion of fish with chips costs £8.50 - it’s made that nut even harder to crack, but by creating an experience customers are coming round to what Malt & Anchor is all about.

“At first, the chat around town was how much our fish and chips were. People were using us a treat, but now we’re starting to build momentum, word is getting around and our TripAdvisor reviews are really good. We are changing people’s perception and showing that for £8.50 they are getting a really good product. Our aim was always to shine fish and chips in a different light and not undersell what is a tip-top product.”

Its slightly higher price point does mean Malt and Anchor has a window of opportunity to introduce deals when it needs to that perhaps other margin-lead fish and chip shops can’t. For example, it is currently giving out vouchers that can be used in January, February and March each with a different offer, such as buy one get one free fish and chips or spend £10 and get free ham hock mushy peas.

Dan concludes: “We really want to create and build-up that experience all the time. We’ve got a great opportunity as an industry to move forward but to do that we’ve got to constantly evolve.”