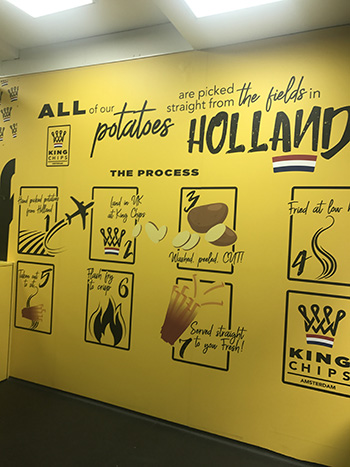 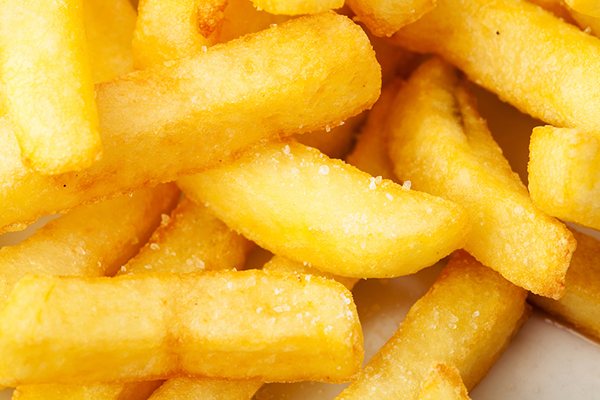 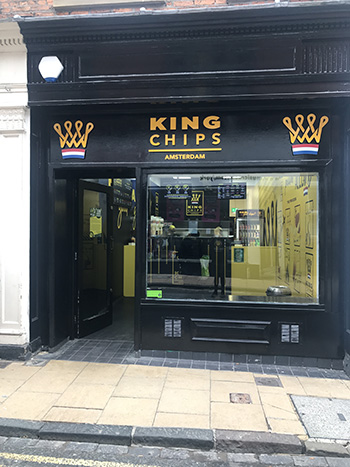 Chips, we’ve been serving them with fish for over 150 years and now us Brits consume a massive 1.6 million tonnes a year. Whether it’s with a sausage, a pie or a fishcake, they are a mainstay of our diet.

And now the humble chip has become so popular that operators are wising up to the fact that maybe, just maybe, chips don’t need to be partnered with anything. They can, in fact, be the hero and survive on their own. In recent years this has lead to a rise in the number of concepts opening up in city centres selling purely chips.

So where did this trend come from? It originates from Holland where chips - or “frites” to the locals - are everywhere. They are a national treasure and a popular snack. Prepared fresh to order, using a waxy Dutch potato, twice fried and paired with a sauce, mayonnaise is the most popular, it’s said to be fast food at its best.

To give you an idea how seriously the Dutch take it, Frites Atelier, which has four outlets in The Netherlands and a fifth opening anytime now in Amsterdam, has a Michelin stared chef at the helm.

With outlets on almost every street corner and volumes hitting 10-12 tonnes of potatoes a week, it’s easy to see why operators in the UK are wanting to export the concept.

One such person to do this is Roni Dalal who opened Awesome Chips in Leicester in 2015. Roni first discovered “frites” while travelling in Holland and, after spending six weeks on a German market selling them, he quickly saw the potential to expand this into the UK market.

He comments: “My initial concern was that people see chips as a complement to a meal rather than a stand-alone dish. What I wanted to do is put chips on a pedestal, with a range of sauces and powders and the quality of the fries that takes them to a whole new level. They complement each other.”

Living up to expectations, Roni imports the Dutch potatoes that have made frites so popular in their mother country, twice fries them on Dutch equipment and serves them in paper cones with a choice of over 30 sauces. Three sizes are available - small priced at £2.25, medium at £3.25 and large at £5.75. Where he’s put his twist on the concept is by offering seasonings too such as piri piri, Jamaican jerk and chipotle.

“The response has been phenomenal,” says Roni, who has since opened a second site in north London and is now seeking others in major cities across Southern England.

Another couple to follow the Dutch concept to the letter is husband and wife team Myles and Candice Matthews who opened King Chips in York City Centre a year ago.

“It’s just something different,” says Candice. “People come in and they don’t want to wait 40 minutes to an hour for their food, they want to be in and out in five minutes. Everything is freshly prepared on site every day, it’s not like KFC or McDonald’s where you see the chips sat on the shelf, here every portion is fried to order.”

Staying true to the Dutch concept, King Chips imports it potatoes from Holland too. “The variety used over there is a bit more waxy so when the chips are twice fried they come up really crispy,” explains Myles. “It’s also a more yellow potato and has more flavour, which is important.”

The potatoes are hand cut using a vice, rinsed and dried, before being twice fried, the latter being the key to getting them really crispy, says Candice. Once again the concept is simple, three sizes - 200g small for £2.50, 350g regular for £3.50 and 900g large for £5.00, served with one of the 20 or so sauces on offer.

“People didn’t get it at first,” admits Candice. “They said “Chips? What’s so great about chips?” So we put up some graphics on the wall explaining the concept and where the potatoes come from. Ever since, we’ve seen trade really grow. Customers see chips either as a snack or, by adding toppings, something a bit more substantial.”

Open daily from 11-6pm, at the weekend its families and young children that the concept  attracts while during the week it’s workers and students. And they are all keen to try something different.

“Customers often ask what is the most popular sauce, or what is our favourite one,” she adds. “I really like the fries sauce, which is a Dutch-style mayonnaise, but I would say our most popular are the spicy ones, Hot Shot and Piri Piri, then mayonnaise and BBQ.”

With the Dutch chip concept catching on here and consumers happy to part with a couple of pound for this snack, it’s expected to really take off in the next few years.

Whether operators stick to the traditional Dutch way or move to a more British-style remains to be seen. But one thing is for sure, with the concept having mass market appeal - in particular attracting vegans and vegetarians - it’s only likely to grow in one direction.

Shetland Blacks shape up to produce a really crispy chip

A fish and chip shop in Portsmouth has created a talking point with its customers by serving chips made from Shetland Black potatoes.

The Fisherman’s Kitchen in Southsea serves the potatoes, which combine a distinctly dark purple skin with a creamy yellow interior and a ring of purple, with battered whitebait as well as grilled cod.

Owner Gary Moreton-Jones, who opened the shop six months ago, says: “Shetland Black is a really good all-rounder and we use it here for chips, mash and crisps.

“For me, they have a really earthy taste and, as we’re big on bringing out the flavour of the potatoes and the fish, it works really well as you get the perfect combination - the taste of the sea and the taste of the earth.”

Preparing them in the same way as his usual potatoes, which involves blanching, letting them cool and then frying to finish, Gary says they give a really crispy chip.

“Customers love the Shetland Blacks and they generate a real interest.”

GET INTO THE GROOVE

Featuring a groove-shape, Farm Frites Finest Round Cut Dippers are ideal for dipping or loading up with sauces or cheese.